Looks like we are going to be heading home tonight! Woo hoo! We thought the doc would keep us until at least tomorrow, but Emily is such a rock star that they are OK to let us go tonight. She has been doing well with her oxygen and heart rates. She has been tolerating her feeds too. So right now, she has no tubes or wires (other than the IV site). She still has some pain, but that is to be expected. She is actually struggling most with muscle spasms. They cause her whole body to tense and that is not fun!

She has continued to keep us on our toes with multiple diaper changes. We have even seen some smiles and even better, heard some giggles. I think she was flirting with her male nurse overnight because she was cracking up for him at around 4am. The stinker! It has been great to see more of the Emily that I know coming out today.

The doctor said that she is really impressed with the progress that Emily has made in the past couple of days.  She really did not expect Emily to turn around so quickly.  That is what happens when you underestimate my girl - she WILL prove you wrong!

Praising God for working in my girl and helping her to get this far. We have a long road ahead and are a bit nervous about getting home and taking care of her on our own, but we know that God will give us strength and wisdom to tackle what comes. Thank you SO much for all of the prayers and words of encouragement along the way!
Posted by Wherever HE Leads We'll Go at 3:00 PM No comments:


It has been an eventful morning so far! Emily did really well overnight. Her heart rate was in the 120's (it was in the 160's the past few days). Her oxygen levels were hovering around 100 and she sounded a lot less gunky. She did struggle some with spasms and pain since we spaced her meds out, but she was just kind of whiny, not crying her eyes out so we will take that as progress.

This morning, right at the nurse shift change, Emily had a BM that required the help of about 5 people. I called the desk for help and the overnight PCA (patient care assistant) came into the room.  By that time, I had pulled back the covers to see how bad things were.  He looked a bit stunned and said "Um, we are going to need more help.".  Soon we had both nurses and both PCA's in the room and we all pitched in to clean up the mess.  The funny thing is, we all just stood there for about 2 minutes wondering where to begin.  We had to clean Emily and then move her to the wheelchair so the bed could be changed and cleaned.  Then we had to have housekeeping come and mop the floor (yes, it was THAT bad).  She is definitely making up for lost time!

Her tummy still feels a bit tight, but we are heading in the right direction. She spent about 2 hours in her wheelchair. So she has been working hard this morning! Please keep those prayers coming. God is at work in Emily's body and He is going to bring healing. And now that she is a bit more awake, my girl is showing these docs and nurses just how strong she really is!
Posted by Wherever HE Leads We'll Go at 10:00 AM No comments:

Today started with some good news. Emily was weaned off oxygen. She had some low oxygen levels overnight even with the oxygen on but today her numbers have been in the high 90's most of the day while breathing room air.

We also were able to get Emily up into a wheelchair yesterday and today. She doesn't like the process of getting into or out of the chair, but she was pretty happy while in the chair. She was able to sit up for about 2 hours. We also went for some short walks through the halls. It was good for both of us to get a change of scenery. Amazing what that can do for our morale!

Yesterday, Emily was on IV fluids all day, then we started her regular feeds overnight via the pump.  We did her 9am bolus feed and then her heart rate went crazy and she was not happy. An x-ray was taken and we found out that Emily has a lot of gas in her belly. That is causing her heart rate to race, her oxygen to drop (although that was better today) and lots of discomfort. We had to stop her feeds again and put her back on IV fluids to give her digestive system a rest.

She needs to pass the gas and have a bowel movement. If she is not able to do it on her own, she will be given some IV meds tomorrow and if that does not work we will have to take some more drastic measures to solve the problem. So we will be here for a few more days, for sure. She did have a tiny BM today and has been able to push out quite a bit of gas, so we are hopeful that she will be able to resolve this on her own. We are also continuing to work on some breathing exercises and suctioning out some of the gunk in her chest.

Please pray for the following:
~ That she will be able to "vent" the gas on her own and have a good BM soon.
~ That her breathing would continue to improve as we do her breathing exercises and as we get her up in her wheelchair each day.
~ That her pain would be well controlled as we tweak her med schedule (the meds are slowing down her system and not helping the tummy problems so we are trying to space them out more).

Thanks for the continued prayers!
Posted by Wherever HE Leads We'll Go at 12:00 PM No comments:

First, some updates from yesterday:

Emily did have a blood transfusion in the afternoon. It really helped her look and feel a bit better - it also helped her heart rate to go down some. They were concerned about blowing her IV by doing the transfusion, but they also didn't want to stick her again.  Thankfully, they didn't run into any issues with the transfusion.

She had her catheter removed and did very well with that. She has some swelling but ice seems to be helping with that.  She was doing well with her feeds during the day. She never did have a bowel movement yesterday. She rested quite a bit during the day, but was still pretty jumpy, so I am not sure that she was feeling very rested.

Overnight, Emily decided to make things a little exciting. Around 3am, her oxygen levels dropped, her heart rate got pretty high and she spiked a fever. She was receiving her feeds through a pump, but decided that she was done with that, so she pushed all the formula out into a Farrell bag (it is supposed to allow her to push air out of her belly). She sounded pretty "gunky" and at one point was really struggling to breathe. She was put on oxygen and that seemed to help.

She had a chest x-ray and more blood work (did I mention the poor girl looks like a pin cushion at this point?). The chest x-ray showed that her left lung was not fully expanding so we had the respiratory team come and work with her a bit. I am also doing some breathing exercises with her throughout the day. Her fever finally broke close to 5 or 6 am. Her heart rate went down too, but is still on the higher side of normal. She has been on minimal oxygen all day and still sounds a bit “gunky”. She has been put back on IV fluids rather than her normal feeds, but we hope to continue the feeds overnight.

So here are our prayer needs at this point:
~ She needs to have a bowel movement.
~ Her breathing needs to stabilize so she no longer needs oxygen. Pray for no pneumonia!
~ We need to get back to regular feeds and she needs to tolerate them well.
~ Pain management has gone fairly well, pray that continues.

Thank you so much for the continued prayers! You have no idea how much it means to us! This has been a challenging time, but we know that God is in control of this situation and He knows Emily’s needs better than we do.
Posted by Wherever HE Leads We'll Go at 3:00 PM No comments:

Whether then you eat or drink, or whatever you do, do all to the glory of God.

Wherever HE Leads We'll Go
Kentucky, United States
We are Mike and Dawn. Followers of Jesus Christ. Native Rhode Islanders who now live in Kentucky. After 12 years of marriage, we were blessed with a beautiful daughter, Emily. She was born with Cerebral Palsy. She has brought more joy to our lives than we could have imagined. She has also taught us more than we ever expected. Mike is the administrative director for a christian retreat center. Dawn is a stay-at-home mom and loving every minute of it. 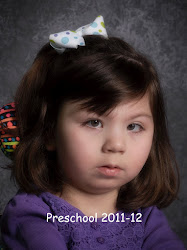 Now to Him who is able to do immeasurably more than all we ask or imagine, according to His power that is at work within us, to Him be glory in the church and in Christ Jesus throughout all generations, for ever and ever! Amen.

The Start of Emily's Story 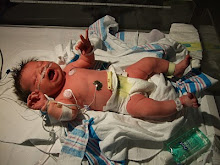 For you created my inmost being; you knit me together in my mother's womb. I praise you because I am fearfully and wonderfully made; your works are wonderful, I know that full well. My frame was not hidden from you when I was made in the secret place. When I was woven together in the depths of the earth, your eyes saw my unformed body. All the days ordained for me were written in your book before one of them came to be.